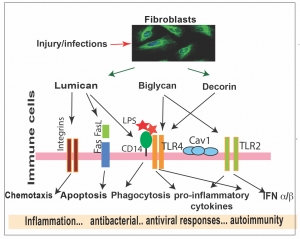 We are interested in the role of small leucine-rich repeat proteoglycans (SLRPs), lumican, biglycan and decorin in cell and tissue functions. As structural proteins of the ECM, these SLRPs interact with collagen fibrils and regulate collagen assembly and connective tissue structure. However, recent studies indicate additional interactions of SLRPs with cell surface receptors that influence cell migration, proliferation and induction of pro-inflammatory cytokines in an ECM that is remodeling during infections and inflammation. Our studies show that mice lacking lumican systemically, when challenged with bacterial infections of the cornea (Shao, 2013), or the lungs (Shao, 2012), are unable to clear the infection, and display more severe disease symptoms. We discovered that lumican released by activated fibroblasts, binds to the surface of neutrophils and promotes neutrophil migration (Lee, 2009). Lumican (Wu, 2007), and the other SLRPs interact with pathogen recognition receptors on macrophages and dendritic cells to modulate host response to infections. We have several projects studying how these SLRPs regulate bacterial and viral infections and autoimmunity.